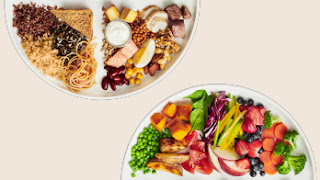 Canada's most recent Food Guide was released at the end of January 2019.

The guide has a focus on balance.  A balance of not only with what you eat, but the balance between eating nutritious food and activity.   It looks like portion control is less of a focus, rather than the balance of what you are eating between fruits & vegetables, protein foods, and whole grains.

With that being said, the guide does not have that much information if you are on any special diets, such as the gluten free diet.  The Canadian Celiac Association consulted dietitians to see what this balanced diet means to people with Celiac Disease and require a gluten free diet.