What do you find Pinteresting? Million Dollar Gluten Free Spagahetti!

Posted by Abisaac Saraga on December 29, 2017
2018 is just around the corner and Amanda has finally discovered Pinterest.  I basically manage our blog and our social media, and yes, we do have our own Pinterest board, but since Amanda has chosen to stay far away from most of the social media stuff, this is pretty new to her.

She recently had a "where have you been all my life" moment with Pinterest trying to find meals that we can make or adapt, and yes I am somewhat exaggerating, but only somewhat.

The first recipe she tried this week was an awesome success.  Amanda adapted the Million Dollar Spaghetti recipe from Gonna Want Seconds that she found on Pinterest.

Our adaption is below with notes in purple: 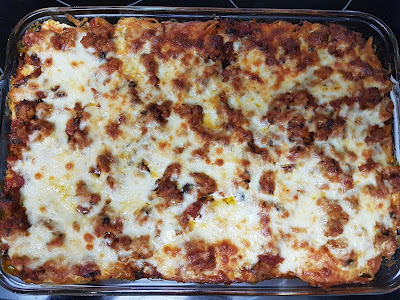 DIRECTIONS - We adapted the order in which to make things for gluten free as gluten free pasta tends to absorb all of the sauce/liquid once it's made. We opted to make the pasta last, just before putting together the meal.

In a large skillet, heat 2 tablespoons of olive oil over medium heat until it shimmers. Add onion and garlic and cook until they begin to soften, about 5 minutes. Add sausage to skillet, and brown, crumbling sausage with a wooden spoon. Cook until there is no longer any pink in sausage. Drain well. Add 1 jar of spaghetti sauce to skillet. Set aside.

Bring a large pot of water, with 1 Tablespoon of salt, to a boil. Cook pasta according to package. Drain well, then return pasta to original pot, and add 1 jar of prepared spaghetti sauce and combine. Set aside. (In the original recipe, this is done first, but we felt the gluten free pasta would not hold up if we did it first)

While pasta is cooking, place half the slices of butter in the baking dish.

END RESULT:
It was delicious and a huge success in our house. This was our Christmas eve dinner and who knows, maybe it will become a tradition around here. It is very rich in flavor and it made a LOT (filled a 9 x 13 baking pan) so we froze about half of the meal to save for another time.