What to do when you don't have gluten free breadcrumbs for your dinner?

Posted by Abisaac Saraga on March 22, 2017
It happens sometimes right?  You run out of gluten free bread crumbs, then what?  Or maybe, you just don't want to use the gf breadcrumbs because, well, it is kind of expensive compared to regular breadcrumbs and you just want to find something else to coat your fish.

Well, if you were stuck like us when we made this fish, it is time to get creative.  With what you do have!  Your cupboards or pantry might be full of gf goodies that can be ground up until a crust.

Initially for this recipe I was going to use the gf Chex cereal.  A whole box of cereal probably cost as much as a small box of gf breadcrumbs, so quite the deal!  But when I went into the cupboard we only had the Chocolate stuff, and I DID NOT want chocolate covered cod.

Next step, snack shelf and BINGO!  I spotted the Quaker Crispy Minis, with smack dab on it labeled gluten free!  And cheesy minis too.  So I grabbed some handfuls of them, and crushed them up to make a breadcrumb.  And these are really inexpensive too.

I dredged the fish in the Johnny's Dill Ranch dressing and then coated in the crushed minis.

Heated a pan with oil and fried.  This was one TASTY dinner.  We have two kiddo's that just devoured it too.  It was win win all around.  Cheap, tasty and kid friendly! 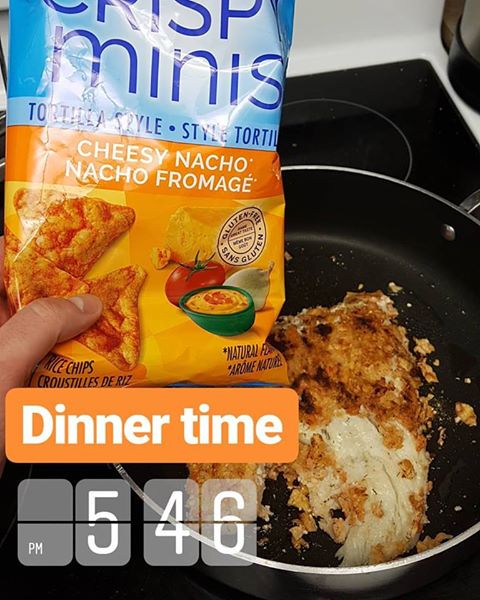