Burgers Priest in Edmonton - This ain't no big mac

Posted by Abisaac Saraga on December 07, 2022
This ain't no big Mac, it's the High Priest done up gluten free at Burger's Priest in South Common. We think they used the Promise Gluten Free bun, but can't quite confirm. They buttered the bun and pan toasted it.
Amanda's face lit up as she bit into it claiming it's just like eating a big Mac. However the big Mac sauce at McDonald's is NOT gluten free. But the burgers priest special sauce was good to go. 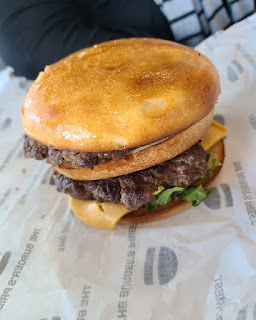