Posted by Abisaac Saraga on August 03, 2016
It was not that long ago that Edmonton was voted one of the top 10 places in the world to eat pizza. I'm sure most people were baffled by this!  I sure was at first.  Pizza doesn't really come to mind when you think of Canada, let alone Edmonton.

But when you look closer at whats out there in Edmonton, there are some damn good pizza places. Some of them even serve up gluten free.  Just check out places like Parlour, Famoso and CRAFT Beer Market.

This was not on the list of top pizza places put it out in April 2016, but have you checked out Love Pizza yet?  Love Pizza is fairly new and is located downtown at Jasper Ave and 109 Street in the same plaza as Save-on-Foods.  And yes, it very trendy, with their flat bread style single serve pizza's.  But I think they are the real deal.  They do not only have clever marketing, fun photos, and a great in restaurant atmosphere, but they have a delicious menu.

So now, remember this is a pizza place, it is very difficult to reduce cross contamination, but they try.  They switch gloves, specially indicate gluten free pizzas coming through the oven to alert the next person to touch the pizza etc.  So obviously, approach with caution and be vocal.

But damn it is worth it and very tasty!  Their website indicates that they source from local businesses where they can, including Gold Forest Grains, Irvings Farm Fresh, Spolumbo’s Fine Foods, Pinocchio Ice Cream and more.

We've gone several times and have love the City Market and The Q.  Below is the Meatatarien and The Q.  Basically we have not been disappointed yet. 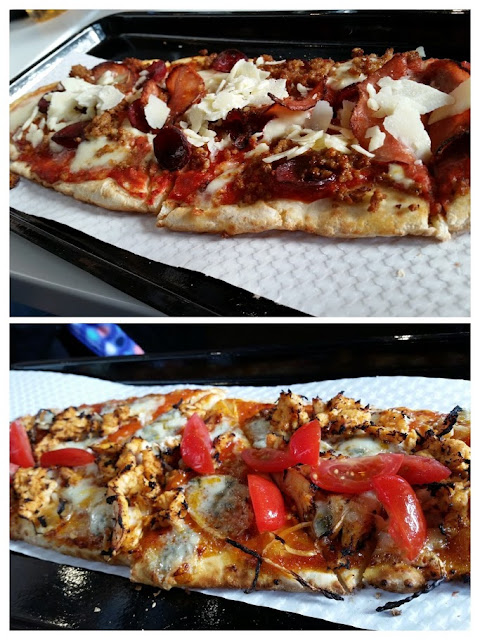 BTW, kids eat free on Sunday and they also have a loyalty app!