#yymhelp Alberta has lots to be proud of

Posted by Abisaac Saraga on May 11, 2016
I moved to Edmonton from Toronto almost 10 years ago.    It didn't take me long to fit right in to the city of Edmonton and the province of Alberta.  Although to tell you the truth, growing up a Toronto kid, I really never thought of being anywhere else but Toronto, so it still surprises me that I'm here.  But I am here, i'm loving it, and I'm proud to be an Albertan, and so should you.

I came to this province at the tale end of a boom, and have slowly seen the province go through the financial struggles it is currently battling.  It has been a common theme in my news feeds "Company x to lay off y number of employees".  I've had conversations with people from HR, where they've talked to me about the struggle of their decision making process to layoff people "It's not in our company values to do that... but we won't survive another 3 months of in the red if we don't"  These companies don't want to layoff staff.  Especially the oil companies.  They told me "I let them go now, I can't get them back when business picks up".  It was hard to see their struggles that would affect so many lives.

Then on top of the of the slumping economy and layoffs from the oil industry, a fire breaks out in Fort McMurray, the heartland of the oil industry.  The city that had people working to keep the province in prosperity.  A community that has been struggling really hard.  This isn't the first time a city has caught fire since I moved to Alberta.  I remember the devastation that came about when when Slave Lake caught fire.

Over 80,000 people evacuated a city in a remote area of Alberta, with only two ways out.  You either go North, or you go South.  North takes you to the work camps, and South takes you towards Edmonton.  Watching the videos being posted online was terrifying.  I don't know how I would have reacted.  But none the less, people were heading this way, with nothing but what they could grab before hitting the road.  Which probably wasn't much.

The next part is what we should all be proud of as Albertan's.  Nevermind West Jet, Oilers, Flames, Eskies, Labatt Brewery and even the NHL pitching in to help, but people like you and me were helping out.  People that run small businesses just stepping up to the plate.  People that have already been hurting from a slumping economy reached out to help.

Restaurants from around the city like Love Pizza, Earl's, New Asian Village and tonnes more were offering free meals to evacuees.  What made me most proud was the Celiac community stepping up to help the community as well.  I knew of three bakeries that stepped up to the plate; 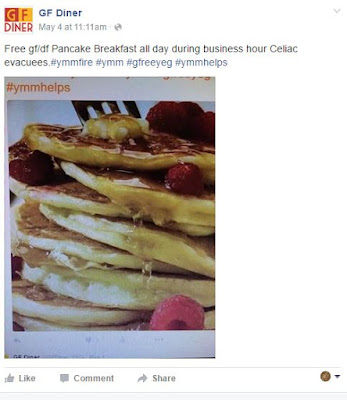 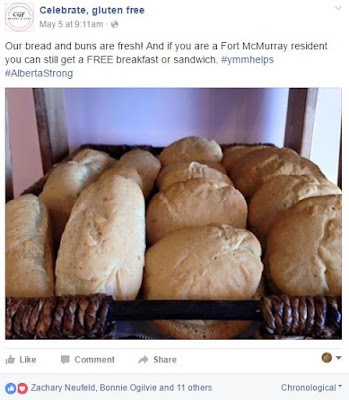 There are lots of people that need help and it is the little things like this that make a big difference.  Even if the help was for one day, it is help.

The evacuees are going to be displaced for a long time, and there is lots of help that can be offered.  Not all of it has to be dollar donations, and not all of it has to be buying new products.  I've become to realize that basically everyone knows someone that has been effected.  Two of my co-workers are from Fort McMurray, so it was an instant "Is your family safe?  Is there anything they need?"  It didn't take me long to gather up some kids clothing from others, an extra stroller we had, and tooth brushe and tooth paste to make sure her family had some of the necessities.

Another thing you can do is donate blood at the Canadian Blood Services Clinic in Edmonton beside the University of Alberta Hospital.   Why donate blood? well as the Canadian Blood Services says, "It's in you to give".  The city just grew in population.  Not only that, patients at the healthcare facilities in Fort McMurray were emptied out and brought here.  There is always need of blood, and with an influx of population and what I imagine is over crowding at healthcare facilities here, it will definitely be needed.
News