Glutenberg Beer, Beer without the Gluten 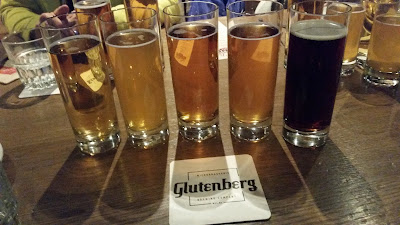 From left to right Blonde Ale, White, America Pale Ale, IPA, Red
We recently attended an event sponsored by Glutenberg, a Quebec based brewer that started in 2011 and has won numerous awards including gold, silver and bronze awards in the “Gluten-free beer category” at the World Beer Cup.

At the beer event, we tasted all five of their beers, paired with some delicious food supplied by Care Bakery at CRAFT Beer Market Edmonton.

I won't talk about all of the beers, because really you need to taste them for yourself at CRAFT, or track them down at your local liqour store.

My two favourites were the Glutenberg Blonde Ale and the Glutenberg Red. I found the two beers very contrasting from eachother, so it really shows the range of beers they make well.  The Blonde Ale was nice and light while the Red was very strong, almost stout like.

The blonde has aromas of pears and fennel and pairs well with marinated olives, cooked meats, pad thai, endive salad, goat cheese.  Which is why this was served as the welcome beer at the event.

The red has aromas of roasted nuts, coffee and caramel and is paired well with grilled meats and cheese burgers.  Because of some of its sweet tonnes, this beer was paired up with our dessert which was a gluten free coffee crisp cake.

Check out their website, read about their beers and the awards they've won.  Then head down to CRAFT Beer Market and try one!
Gluten Free Products