Posted by Amanda S. on June 03, 2015
The other night, I was privileged enough to attend the Gluten Free Brewmasters Dinner at Craft Beer Market downtown Edmonton . It was excellent! We were seated at a table with all of the Brewmasters and we learned so much about the making of Gluten Free Beer.

For example, there are some companies that make their regular beer and then use enzymes or even separation methods to remove the gluten produced by the barley malt. While other companies opt to use rice malt instead and then produce a gluten free beer. According to the information provided at the event, each of the beers we sampled were able to register at most as less than 10 ppm which enables them to be gluten free.

Here is a visual of the menu and Gluten Free Beer sampling we enjoyed that evening along with some pictures of the food (yum!) 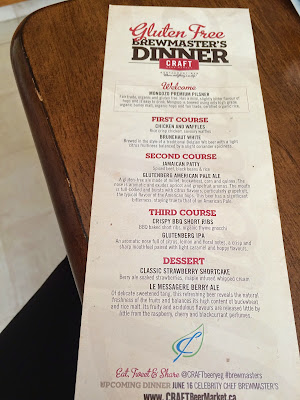 To be completely honest,even in my pre gluten free years I was never much of a beer drinker, so unlike others it is not really something that I miss. That being said, I was amazed to hear about the processes and efforts required to provide the Gluten Free community with such a variety of Gluten Free Beer options. I recall when I was first diagnosed Celiac I simply assumed that this meant no more beer for me...ever! I was gravely mistaken and good thing! There are so many different Gluten Free beers out there...just ready to be enjoyed on a hot summers day.

Enjoy the beer and drink responsibly, both for physical safety as well as gluten related safety.