Gluten Free Cookbooks are a plenty!

Posted by Amanda S. on February 25, 2015
It seems that gluten free cookbooks are everywhere these days. If you know of a new, hot chef in the media (particularly American media) it seems that they have either a host of Gluten Free recipes in their new book or they have put out a new cookbook devoted entirely to eating Gluten Free. Now, some may ask "Is this not a good thing?". I can only speak for myself here and as a blog is entirely based on my/own opinions, but for me I can say that I do appreciate that there are always more new and different products and cookbooks out there that are Gluten Free. That being said I know also that there's nothing quite like taking an old family favorite and rejigging the recipe to make it gluten free. Even better and more important is that feeling you get when that old family favorite in gluten free form is just as good if not even better than you remembered it to be!

I want to share another new cookbook that I stumbled across while watching Chef Jason Roberts on the Rachael Ray show. He himself is gluten intolerant and therefore the entire cookbook is filled with gluten free recipes. The book is called "Good Food Fast! Deliciously healthy gluten free meals for people on the go" by chef Jason Roberts with Stacey Colino.

Since you just never know without perusing through a cookbook on your own if you will like or dislike it, I always start by trying to take it out of the public library. Yes, when it's a new release you will most likely be on the waiting list before taking it out, but for me that is a wait I am willing to accept. I do not like spending the money on a new cookbook only to find that I do not like any of the recipes. I took out this cookbook because one recipe in particular really caught my attention. If one recipe from a cookbook works out to your satisfaction, then aren't you more willing to try others in the same book? I know I sure am.

Here is the recipe from Good Food Fast by chef Jason Roberts that caught my attention. And while I admit that I have not yet had a chance to try this recipe it is certainly on my list of new recipes to try soon. Happy Gluten Free reading! 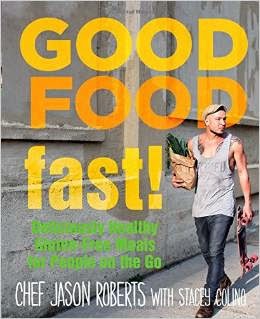 1) Heat olive oil in a large pan over medium health and then add onion, carrot, celery, garlic cloves, and fennel seeds. Cook the vegetables slowly for about 15 minutes, or until carrots are tender. Add the paprika, orange zest and juice, and white wine or verjuice, and cook until liquid is reduced by almost two thirds.

2) Add chickpeas, tomatoes, chard, and parsley. Finish with a good pinch of salt and pepper. Allow dish to sit and steep away from heat, covered, for 20 minutes before serving.