Posted by Abisaac Saraga on August 28, 2013
I'll have to admit, I was hesitant to go The Clever Rabbit Vegetarian Cafe.  Mainly because I'm not a vegetarian, so I didn't know what to expect.  But what drew us to the Clever Rabbit was a donut fest that promised some gluten free vegan donuts.  So I thought why the heck not, it is not every day Amanda gets to go out and have a donut.

So while we only went for the donuts, our friend RL ordered off their menu hoping for some gluten free vegetarian goodness.  Which is what she got.  Just like Padmanadi, there is not a lot of gluten free options available because it is typically gluten that holds together the vegan proteins.  However its great to know that if you are hanging out with your vegetarian or vegan friend, you can both go to the Clever Rabbit and have a great meal. 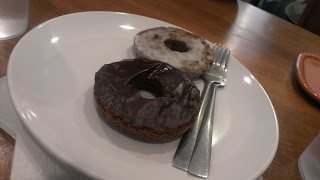 So first off, the donuts were certainly not your typical donut, but they were pretty good.  I think I liked them better than Amanda did, and I'm not the Celiac.  They offered a chocolate and vanilla glaze gluten free vegan donut at $2 a piece freshly made.  I don't know if they always have the donuts available, but its worth a try if you are in the 124 street neighborhood in Westmount (BTW, what a trendy area!)

RL ordered the Walnut Chickpea Burger with no bun served with a side of chips, salsa and a salad.  I tried it and it was really good.  The chips and salsa were addictive.  Unfortunately I can't remember what else was gluten free off then menu except that all the sides were gluten free.  But you can read more about the Clever Rabbit Vegetarian Cafe on their Urbanspoon page. 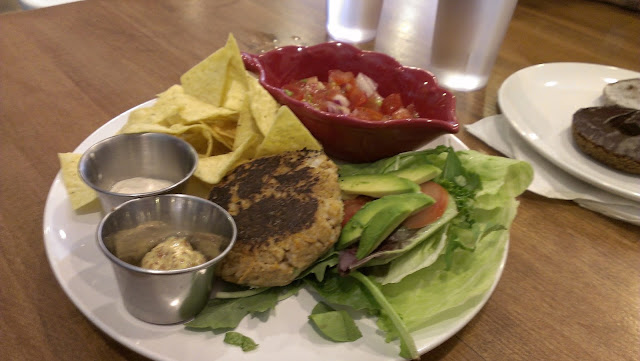