Posted by Abisaac Saraga on April 06, 2013
We recently went on our second cruise with Celebrity Cruises.  The first one was absolutely fantastic, and they served up some great gluten free food.  We were so impressed we had to have two blog posts about it:
What I want to share with you is that Celebrity Cruises really has stepped it up!  In the previous posts we explained that if you had any dietary restrictions, you would get the menu the day before, choose your meal and they would make sure it was prepared gluten free.  That is still an option if you want to do that, however, now the main dining room menu's have markings for what is gluten free, vegetarian and dairy free.  This new addition really makes choosing your meal easy.  However, Amanda did admit she still preferred being able to see the menu the day before because there are items that are not marked as gluten free that they can prepare gluten free for you ahead of time if you ask.

They also changed the way they handle gluten free bread at the buffet.  Previously they had the bread put out with the other bread, just covered and with separate tongs.  Now, probably through cross contamination complaints, they don't keep the gluten free bread out.  You simply ask for it, and they get it for you straight out of the bag in the kitchen.  If you get it toasted, they clean off a press, and cover your bread and use the press to toast it.  Amanda was really impressed with how they did that without her even having to ask.  We also found out that they use Enjoy Life gluten free bread.

A couple extra things they had that they didn't have on our last Celebrity Cruise was gluten free cookies at the cafe.  They had one jar on top of the counter with a separate pair of tongs and a red circle beside it to remind staff that the tongs are only for gluten free items.  Still to be safe, you can ask them to grab a new set of tongs.

They also have all day long made to order gluten free pasta.  They use fresh everything when it is requested.  The pasta was really good.  All of their sauces were naturally gluten free, including the meatballs.  I personally loved the bolognese sauce.

I think Amanda's highlight meal of the cruise was the veal cordon bleu, breaded with rice flour and stuffed with cheese and ham.  The part she liked the most about this meal was that it was made the same way for everyone, not special because you are gluten free. I made sure to take a picture of that too!  Here are some of the pictures we took of the various gluten free foods available: 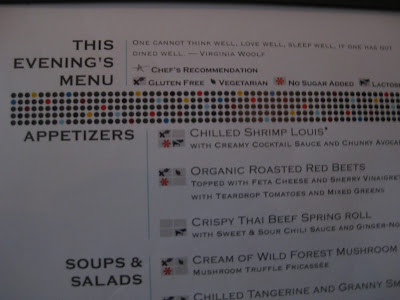