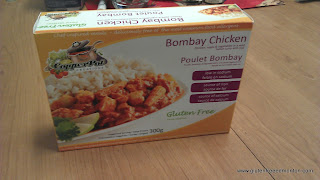 The last time we wrote about Copper Pot Creations gluten free frozen dinners, was back in 2010 when they were a young company with a great product.  Two years later, they have matured and improved their product.

First off, they matured a lot on their packaging, now boxed and put in a tray like every other frozen meal you would have.  Very slick packaging that stands out if you ask me.  They still offer Bombay Chicken, switched from penne to a sphaghetti Bolognese, chicken cacciatore and both a veggie and meat sheppards pie. 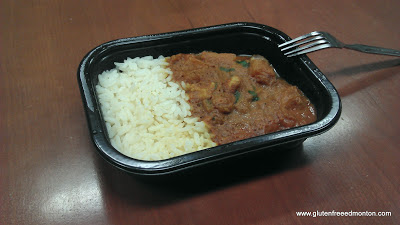 Copper Pot Creations recently sent us a few samples to try out because we had not written about them in so long.  They wanted to show us that they have been working on their products and wanted to make sure we sampled them so we were aware of the changes and improvements.

Amanda and I both sampled two different meals and we used them for what they were meant for, convenience.  We both had one for lunch one day when we didn't have any left overs.  I think we went out for dinner the night before.

I had the Bombay Chicken, which when warmed up at my office, everyone thought was a homemade meal, because it smelled so good wafting out of the kitchen area.  It had great flavour and was well portioned.  It didn't leave me hungry after. Amanda had the meat sheperds pie at home for lunch.  She really liked it, and said it was not watery like another brand of frozen sheperds pie meal we had picked up from Ed's Gluten Free many moons ago.

Great thing is that Save-on-Foods has picked up their product so it is easily accessible across the city. You can also find their product at the Sunterra Market and Gluten Free Mart.