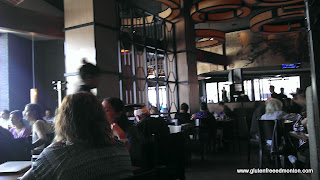 PF Chang's has finally arrived in Canada.  Unfortunately it's only in Toronto right now.  But I bet you would love ti have one in Edmonton!  Anyone we hear from that has traveled to the States always rants and raves about PF Chang's gluten free menu.  So on a recent visit to Toronto we had to see what PF Chang's was all about.

The location is located in the new Shops at Don Mills, once a neighborhood mall, now a booming high end outdoor shopping village with park and fountains.  I've never been to a PF Chang's so I didn't know what to expect.  I always thought pretty casual, but being in this new shopping area, I thought, wow, pretty fancy.  Until I saw it was beside a Joey's, which is known to be pretty casual (apparently except in Toronto). 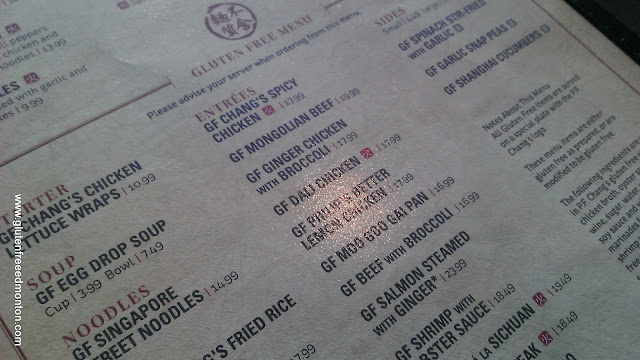 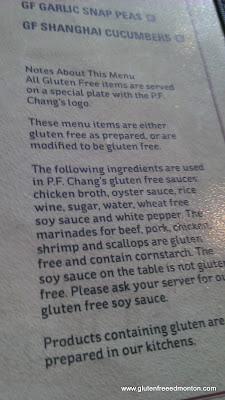 So what's available on the PF Chang's gluten free menu?

So what did we try?  Well we share the lettuce wraps, lemon chicken and Sichuan beef.  And how was it?  It was actually really fantastic.  The lettuce wrap filler was so delicious I was tempted to ditch the lettuce and use a fork because I could eat it quicker. The lemon chicken on the menu was noted as tart, not a typical sweet lemon chicken.  And oh boy did it live up to that.  It packed a punch and it was a tasty punch.  The chicken was coated as well, which was a nice touch.  I thought they would have served it bare, but they must coat it with a rice starch as I have seen in other restaurants.  The Sichuan beef was thinkly cut, along with julienne veggies, all perfectly cooked.  The beef had a good crunch to it that kept on having us picking off the plate even though we were full.  Totally not a disappointment.

I am not going to lie, it was pretty expensive.  I'm not sure if it is expensive in the states, but what I described was just over $50 with no drinks ordered.  But we really enjoyed the experience and thought it was worth it to try it at least once while we were in Toronto visiting family.