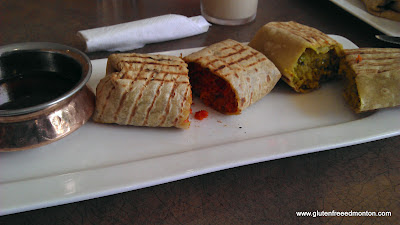 We first wrote about the amazing desserts and snacks available at Remedy Cafe when we visited the University/Old Strathcona location.  We saw there was other gluten free options so when we went to the Remedy Cafe Downtown Edmonton location we tried some of the other options.

On top of the gluten free muffins, squares and cakes Remedy has a wide variety of wraps.  Remedy Cafe has an Indian flare to its food, so you can order wraps from butter chicken, masala to tandori chicken wraps.  They have a wide variety of teas, and shakes with some interesting choices. 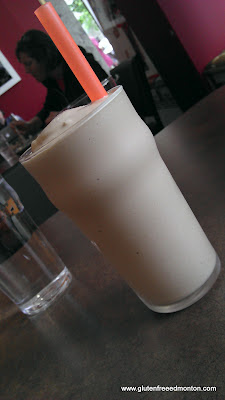 When you order the gluten free wraps they give you two for an order because they are smaller.  When Amanda and I went I had an order of gluten free tandori chicken wraps and Amanda had the gluten free butter chicken wrap and we swapped out one each so we could share.  Each wrap is the size of about half of their stand wrap, so it certainly is a lot to eat.  I also wanted a Chai Latte, so I ordered their vanilla chai shake to gow ith my wrap.

When ordering the wraps, also remind them to wipe down the press, and add parchment paper between the wrap and the press.  That will help cut down the chance of cross contamination.

Amanda typically doesn't like chai lattes, but she really enjoyed the shake.  I did too of course, because it just combined yummy vanilla ice cream with the tasty chai.  The wraps of course were great.  It was nice to have a gluten free wrap that didn't just break apart.  I was even to cut them in half to take a picture without having them break.  They had a lot of flavour to them.  Not surprisingly Amanda liked her butter chicken wrap the best (she loves butter chicken), and I liked the Tandori chicken the best.  It was served with a cinnamon dipping sauce which my sweet tooth appreciated and added an extra layer of flavour for me to enjoy.

I will certainly be going back for more.