Did you spot me on You Gotta Eat Here! with John Catucci?

Posted by Abisaac Saraga on July 04, 2012
When Amanda and I are in front of the TV, it's not uncommon for us to have some sort of food show on, whether it being a reality show like Hell's Kitchen, a contest show like Chopped or a dining show like Diners Drive-Ins and Dives.

When we caught wind of You Gotta Eat Here!, a Canadian show similar to Diners, Drive-Ins and Dives, we got very excited.  We always liked that show to see all the different restaurants and menu creations that they come up with.  Its also a great show to scope out places to eat when travelling the United States.  Finally, a show that will do the same for travelling Canada!  Way to go Food Network Canada!

You Gotta Eat Here visits the small places and big cities across Canada like Peterborough, St. John's, Toronto and yes, even Edmonton!  The shows host John Catucci makes the show fun and enjoyable.  He's a Comedian by trait and seems to have turned to TV Host, and a good one at that too.  You can follow John on Twitter at @JohnCatucci.

Anyways, my real reason for this post is about the show coming to Edmonton.  Back in the dead of winter (Jab-Feb 2012), they came to film a few restaurants around town.  Tres Carneles, one of our favourite gluten free Mexican places in Edmonton invited me down to be on set.  Yes, sorry to burst your bubble on this one, but the people interviewed are hand chosen, but what we said was candid, and my own words.  Mind you, there were tonnes of people at the restaurant but only a few make it to air. 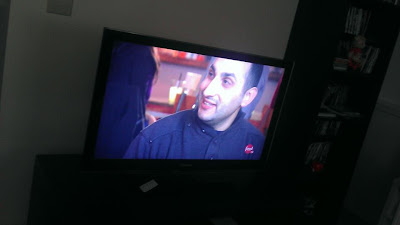 Well, I was super excited to be invited, and happy my employer allowed me to take an extra long lunch to run down to the filming (it helped that Tres Carneles sent me packing with some grub for the office on the way back).  It was a great experience, John Catucci was as nice in real life as he is on the show, and off course if you have been to Tres Carneles, you know the owners are really nice, warm and welcoming as well.  When I was done my interview, I didn't know if I would make it on air, but I did!  Was so excited when I saw myself on Food Network!  I immediately posted this pic of me on Facebook claiming i'm a Food Network star!  Of course I'm not, but i'm allowed to dream.

My interview was about 10 minutes, and I was on screen for about three 5 second sound bites.  Good enough for me.  What was on the cutting room floor was my blurb about how Tres Carneles is gluten free friendly.  They use corn tortillas for their tacos and gluten free filling for all the tacos except for a few that are breaded or have a non gluten free worcestershire sauce.  They have the best taco chips in town accompanied by the best guacamole mix.

Did you miss the episode of You Gotta Eat Here?  Click here to check it out.

Also check out our full review of Tres Carneles here.