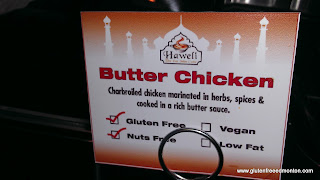 We've written about many gluten free friendly restaurants in the past, and a few of those are Indian restaurants. As we have learned, Indian cooking often uses chickpea flour when breading ingredients.  This often makes their dishes gluten free.

Haweli is located in downtown Edmonton on 103 St along side a few great restaurants like The Creperie.  We tried out the Haweli buffet with confidence because we found out that Haweli is owned by New Asian Village which we eat at often. 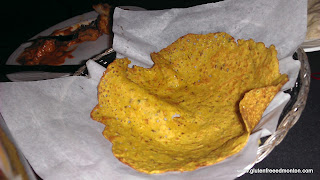 What we saw at the buffet was awesome.  We don't know if New Asian Village is doing this yet, but Haweli had their buffet clearly labelled for Vegan, Nut Free, Gluten Free, and low fat.  I think all buffet's should do that for allergens.  Would make life easier for those willing to venture to a buffet.

The other thing that Haweli did for Amanda was make up a gluten free roti.  They almost forced it on her once they found out she has Celiac and requires a gluten free diet.  They basically wanted her to try it out.  They were quite proud of themselves, and they should be it was so good and flavourful with amazing Indian spices. Amanda appreciated its fluffiness which is often hard to come by when it comes to bread items.

Haweli's dishes were spot on and we enjoyed the Butter Chicken, tandori chicken and other favourite dishes.

Let us know about your experience.