This was certainly a neat find.  I first saw them visiting the downtown market.  What caught my attention is that this was not just any sausage place, it was a chorizo sausage!  And they were advertising gluten free at their booth.  What is a chorizo?  Chorizo's are a spanish sausage, and who better to tell you more than Borbolla Foods, makers of La Abuela chorizo.  Click here to learn more.  That's what really struck me about these guys when they contacted me, they have a clear passion for their product and wanted to let people know what chorizo's are and how to best serve them. 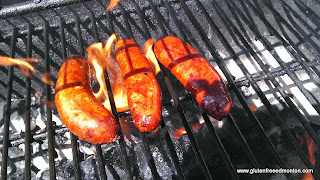 Ivonne, from La Abuela Prouducts was kind enough to give Amanda and I a package of of three Chorizo's to sample for the blog.  They have two types of Chorizo's, Mexican, and Spanish (Spain).  I asked if I could try the Spanish ones, because I grew up eating them.  My father is Moroccan with ancestors from Spain and our family would always serve up chorizo's at family BBQ's. I was looking forward to tasting these.  I hadn't had a spanish chorizo since my grandparents had passed away.

I decided to toss these suckers on the BBQ for lunch one day and relive a family BBQ back in Toronto with Amanda.  I tossed together some diced potatoes, onions, oil, cumin, paprika and browned it all nicely to go with the chorizos. 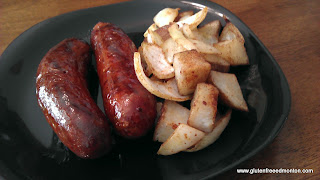 My first thought was that the Chorizos looked a bit different than what I was used too.  All that was different was the size.  My family used to serve tiny chorizo's, but these ones were more like the size of Smokies.  But like I said, Ivonne certainly has the passion for the food, and it shows on their marketing materials to let people know about the different types of Chorizos.

So what did I find?  The ones my family used to serve were tapas style chorizos.  Which totally made sense, considering our BBQ's were 40+ people.  It was easy to dish out chorizos quickly to everyone when they were smaller and cooked quicker.  I remember shoving several at a time into a bun.  Instead, I just got one jumbo chorizo bursting with flavour.  The taste was great and brought me back home to Toronto as a kid.

You can get these chorizos at several places across Edmonton: