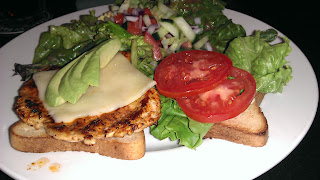 I was recently in Vancouver for the BC Patient Safety & Quality Council's Quality Forum.  There was a one day Social Media Camp that I was asked to speak at.  It was a great opportunity that I could not turn down.

Before going I tweeted out to @gfvancouver and asked for any suggestions downtown near my hotel.  Their first suggestion was St. Regis Bar & Grill.  So my first night, that's where I ended up.  It also helped that when I asked the concierge where to watch some hockey, they suggested St. Regis as well. 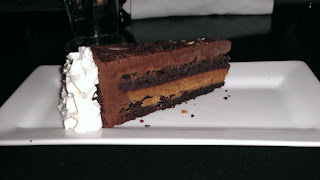 So, a guy walks into a bar... ba da bing... well, walking into a bar you typically don't think gluten free or Celiac friendly.  Considering typical pub grub is all battered and deep fried.  But @gfvancouver chose well.  They carry gluten free bread for their sandwiches and gluten free penne pasta for their pasta dishes.  Not all their sandwiches are gluten free, e.g. I wanted their beef dip, but their dip is thickened with flour.  Their wings are floured, and their fries also do not have a dedicated fryer. 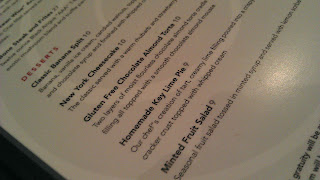 Since I was alone, I just sat at the bar to watch the game and eat some grub.  The manager was working the bar and he knew the most about what was gluten free and what was not.  I had the California Blackened Chicken Sandwich on gluten free bread with a salad.  The chicken breast was nicely flavoured, and topped with lettuce, tomato, avocado and a mayo.  Very tasty, and the bread didn't fall apart.  Now, knowing that I do not have Celiac, and I was just doing this for the blog, I totally forgot that I was eating a gluten free sandwich.  That's how good the bread was.

I don't know who's bread they use, but it may be someone local because they also had a gluten free chocolate tart.  Fantastic tart!  He said he didn't know who makes it, but it is local.  I imagine the bread was too.  Oh ya, no surcharge on the gluten free sandwich.  Bonus!

I hope you check out this place too.  I didn't ask about gluten free beer, but I wouldn't be surprised if they had.