Posted by Abisaac Saraga on March 16, 2012
I recently was invited to Vancouver to speak at a Social Media Workshop in healthcare. The workshop was part of a Quality Forum hosted by the BC Patient Safety & Quality Council. The presentation was for work with my employer and not the work I do with this blog.

The conference was being held at the Four Seasons Hotel, and the conference organizers asked if there were any dietary restrictions. So I turned to Amanda and asked "Hey, should I ask for gluten free meals?" Amanda's actual response was "Why would you want to do that, you don't need it. I wouldn't if I could, I'm sure the meals won't be as good." My response "Challenge accepted!".

So off I go to Vancouver as a psuedo Celiac. I contacted @gfvancouver for some extra tips in the downtown area and off I went. But for this post, I'm going to focus on my conference experience. Also I will note that this blog post is entirely about the food and my experiences and I assure you that I was actually working & learning and not just eating all day long. 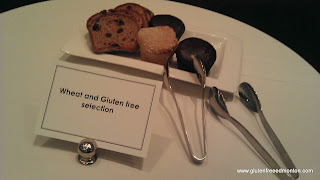 The first breakfast comes around. Nice light breakfast setup for the 1st day, bagels, breads, cream cheese, danishes etc. I sought out the banquet staff and asked about gluten free options, as I had let the organizers know about "my dietary restrictions" in advance of attending the conference. The gentlemen pointed to the corner where they had some slices of gluten free cinnamon raisin toast and muffins. This is where I really played the part, the celiac part I mean. There were butter balls on the table next to it with the coffee, except it looked like crumbs were around from those eating non-glutenfree. So I grabbed a jam and went off to eat. I would have preferred the butter, but things didn't go all my way that day. Already I see some of the frustrations, but was still impressed. It looked like it was possibly Udi's gluten free products.

Since what I was eating was essentially the same as what others were eating, I did not get some of the odd stares at the difference in food options and questions that Amanda has described at the last conference she attended. 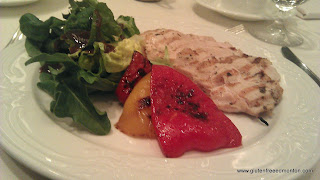 Next up lunch. For everyone else, wraps, wraps and more wraps, with an Asian salad. Once again, I saught out banquet staff for a gluten free meal. Immediately he brings me to the bar where a grilled chicken breast seasoned with basil and lemon juice, with a side of grilled veggies and salad, no dressing awaits me. I didn't notice the lack of dressing right away, so I turned around and asked about dressing, and they responsed, "oh, the dressing has soy sauce in it so you cannot have it". I asked "Do you have another dressing instead?". They were happy to help me out with a balsamic. When I told Amanda about that experience, she said that's pretty much what happens all the time to her, the assumption that plain is the only option when the sauce/dressing contains gluten. I found it weird that this happens so often, because you would think they would just have a different dressing ready, even just olive oil & vinegar, nothing fancy required. Oh well, the meal was good, got some looks this time, because my meal looked much better than everyone else's meal did (chuckled to myself). 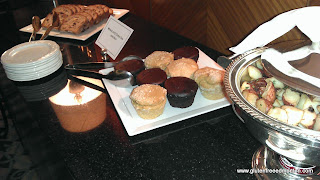 So I knew in total, this was a three day conference, and was hoping for some creativity throughout. Breakfast, was a full out buffet, breads, eggs, bacon, potatoes etc. I saw the bread and muffins off to the side again, this time with some potato in a separate container. The banquet staff said it was dairy free and gluten free potato. I assume someone else was not able to have the potatoes in butter. I grabbed the gluten free bread, gluten free muffin, and pulled out some bacon from the buffet, and skipped on the egg. Not too bad, I know that being a pseudo-celiac for the weekend, I had less to worry about at a buffet with regards to cross contamination, but I did think about it. I also know that Amanda will eat at buffet, but very carefully. Four Season's did seem like the type of place that would make me a separate egg if I requested. Once again, not too many looks from other attendants at the conference with regards to the breakfast differences, more of the same as the day before. 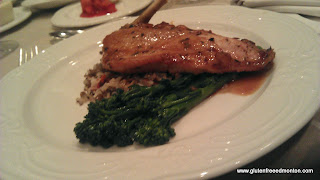 Off to lunch, I was served what everyone else was, except for a different salad. Everyone else had a Cesar Salad with a huge crouton on it. I guess they didn't want to serve without the Crouton? So I had a salad with balsamic dressing again, but had an excellent pan fried chicken breast with an amazing sauce au jus, broccoli, and a multigrain rice. For dessert, a bowl with fruit, as I was not able to have the cheese cake. Amanda mentioned that happens often as well for dessert. So overall so far so good. 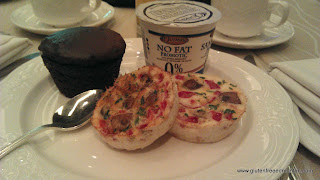 This is where I learned that it just must be tough for people to be creative for breakfast. As someone with no cullinary training I don't know why breakfast is difficult, as I find it to be an opportunity for creativity every weekend (in our kitchen). So this time at quick glance I only see the gluten free muffins out. At the large buffet breakfast, there's quiche, breads, sausage (sitting on top of bread to soak up the grease), and yogurt parfait with oats on top. Nothing really looked gluten free friendly. So here I go again, asking for more food, after all, only gluten free muffins? I was offered some gluten free bread, but I was actually not looking for more starch, but for some protein. I was pointed to something I'd missed at the buffet, an egg white fritata. The banquet staff said they could ask the kitchen staff about the sausage, however, I told them not to as the sausages were put on top of bread (to absorb the grease), there was too much risk of cross contamination. I also asked if they could make the parfait without the oats, and they came back to me with some plain yogurt. Either way, serving a gluten free breakfast did seem to be a struggle, another thing that Amanda has spoken about before when attending conferences. 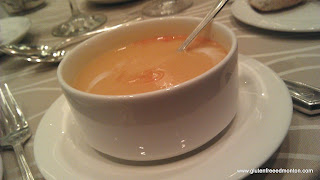 At the last lunch for the conference the one meal they had had no trouble with (creatively), and once again still no trouble with serving up gluten free. Carrot and curry soup (same as all the other guests), and a nice pesto garlic gluten free pasta, which looked similar enough to what all the other guests were eating. Except the guests had wheat pasta :-) Then dessert, well, I didn't get the rhubarb crumble, so once again fruit. However, at least this time it was a fruit salad instead of just chopped fruit. 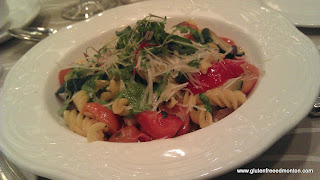 All in all, the food was pretty good and it was an interesting experience at the conference. Having conversations with people about Celiac Disease, spreading the good word of good gluten free food, and dispelling the myth's (and of course working & learning for my job). Putting up with comments like "That's just horrible, I don't think I could go without...". It actually made me feel bad and a bit uncomfortable myself, I can't imagine what it feels like for Amanda.