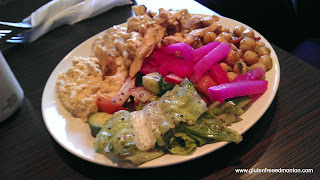 Awhile back Abisaac & I were out for the day and someone shared a great tip with us. They suggested that we check out Dahlia's Mediterranean Bistro on 10235- 124th street in downtown Edmonton.

For anyone who doesn't know, I love love love Mediterranean food but most often find that I cannot eat it anymore because so often the foods are filled with gluten. My very favorite food item is falafel and while yes, there are some that are gluten free but generally in a restaurant they contain gluten. Of course I called ahead to ask my gluten free questions, you can never be too careful. When we showed up, we were pleased with the lady at the counter and the knowledge she had of the found preparation. Basically all of the salads except for the tabbouleh were gluten free.  Also the chicken shawarma was gluten free.  The picture has a salad platter that I ordered.  I brought along Udi's pizza crust and used it like a pita to dip in the humus, Baba ghanoush, chick pea salad, chicken shawarma etc.