Posted by Abisaac Saraga on October 08, 2011
During a trip to Niagara Falls, Amanda and I checked out various types of restaurants.  We wanted to see what Niagara Falls, Ontario had to offer to the Celiac community.  We checked out touristy places like the Hard Rock Cafe, and romantic dinner spots like the Skylon Tower's Rotating Dining Room, to just nice authentic ethnic foods like The Guru Fine Indian Cuisine located on Victoria Ave. at the top of the famous Clifton Hills. 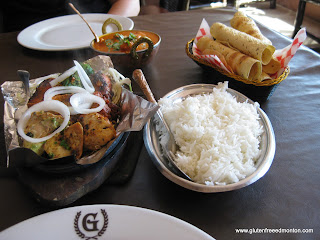 We have spoken a lot about our love for Indian Cuisine and how we often eat at New Asian Village locally here in Edmonton.  So we wanted to see what Niagara Falls had to offer.  We were not disappointed.  The Guru Fine Indian Cuisine was an a la carte dining restaurant.  There was no buffet to choose from.  Which was fine for us, because we have enjoyed Indian Cuisine a la carte before.

We went in for a late lunch, and it was not to busy, so we were sat nicely by the window and got to people watch while we browsed the menu. The menu was pretty big and had all the standard options like pakora (with chickpea flour), butter chicken, tandoori chicken, dal etc.

We chose to share the chicken platter that included tandoori chicken, a mint chicken (Haryali Tikka), and a cream cheese chicken with ginger and spices (Malai Tikka), along with our choice of a curry chicken (we chose the butter chicken).  It was also served with rice and Naan which they replaced with papadum made with chickpea flour.  The meal was not that expensive and very filling for the both of us.  I had never had any of the Haryali Tikka or Malai Tikka before.  Just usually a regular Tikka in yogurt.  These were both great.  Amanda was not a fan of the Haryali Tikka, but I think that was more of the strong green colour it took on from the mint, but it tasted great.

We left quite happy and impressed with what Niagara Falls had to offer in Indian Cuisine.