Is a dairy intolerance related to Celiac disease?

Posted by Abisaac Saraga on October 29, 2011
It seems pretty common that someone with Celiac Disease might be intolerant to other foods.  I know this is the case with a few people I know with dairy.

I took a moment to Google this, because I had nothing else to do, and I at least wanted to make sure that I was making some sense here.  I found one article on Celiac.com that referred to a connection.  The article is titled "How is lactose intolerance related to celiac disease?" and says "Lactose intolerance is frequently a side effect of celiac disease. Celiacs who eat gluten become lactose intolerant after the villi and microvilli in their small intestine become damaged, and are no longer capable of catching and breaking down the lactose molecule."  But it also goes on to say that within time this tolerance is cured.

I do also find it interesting that Kinnikinnick which is obviously 100% gluten free, also has a large product line that is dairy free as well.  So Kinnikinnick must see a connection between dairy free and Celiac Disease too. 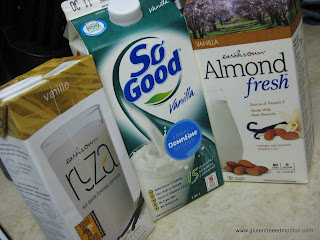 So if you have an intolerance to dairy, what do you use as a milk substitute?  There are plenty of products out there.  We were asked by an PR agency to sample some products by Earth's Own.  They make a line of gluten free, dairy free products including So Good (soy milk), Ryza (Rice Milk) and Almond Fresh (Almond Milk).  I picked up a container of the vanilla flavour for each of the milks to try. I have been using the So Good with my morning breakfast cereal (gluten free chex and gluten free fruity pebbles) and I also used it in my smoothies (which really turned it into a really taste shake).  So Good ended up to be a great substitute for me and tasted really good.  The Almond Fresh had a great nutty flavour to it, you can really smell that almond out of the container.

You can basically pick up Earth's Own products at any major grocery store.  We saw some of their stuff at Wal-Mart, but so way more variety at Safeway including a Chocolate Milk! Yum!