Stephanie O'dea has a blog & two books, all gluten free!

Posted by Anonymous on June 28, 2011
Awhile ago I came across a wonderful writer who chose to cook for one full year, entirely using her slow cooker. To me this was completely fascinating and I dealved right in and learned more about Stephanie O'dea, the author of not the blog titled "A Year of Slow Cooking" and two super easy to follow cook books titled "Make It Fast, Cook It Slow: The Big Book of Everyday Slow Cooking and More Make It Fast, Cook It Slow: 200 Brand New Recipes for Slow Cooker Meals on a Budget.
To me the most important factors featured in both of these books are that all of Stephanie's recipes are written for gluten free friendly meals (great selling feature for people with Celiac Disease), but also that all of the ingredients listed are easily found in any grocery store here in Edmonton. Stephanie includes in parentheses, explanations of particular brands she used as well as other helpful hints and notes about her findings when creating these recipes.

I recently tried a recipe called Baked Potato Soup from Stephanie's second book "Make It Fast, Cook It Slow: 200 Brand New recipes for Slow Cooker Meals on a Budget". I admit I tweaked the recipe ever so slightly (see * for details), but overall I kept it pretty close to the recipe noted in this book. 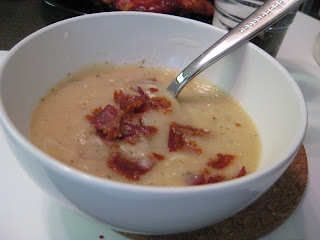 Directions
Use a 6 quart slow cooker. Put the potatoes into your stoneware, and add the onion and garlic. Sprinkle in the seasonings and pour in the chicken broth. Cover and cook on low for 8 hours, or on high for 4 hours. The potatoes should be fork tender. You can use a potato masher or a handheld stick blender to mash the potatoes into the soup. You want to get rid of all large chunks of potato to make a smooth soup.

After smashing the potatoes, squeeze in both packages of cream cheese and replace the lid of your cooker. Cook on high for about 30 minutes, or until the cream cheese is completely dissolved. Stir a few times during this 30 minutes.

*A few changes that I made when following this recipe. Since there are only 2 of us eating dinner I figured making 10 servings was just way too much. Instead I simply used 4 baking potatoes and then all the same quantities & ingredients. However instead of using cream cheese I opted to use 8 ounces of herbed goat cheese.

This was only one of my favorite recipes found in this cook book and I am sure you'll enjoy many of Stephanie O'dea's recipes for yourself.