Happy Anniversary to Us! Top 5 Gluten Free Edmonton Moments of 2010

Posted by Abisaac Saraga on January 06, 2011
Well, not only is it the beginning of 2011, but its also Gluten Free Edmonton's first year Anniversary!  Exactly one year ago today, we wrote our first blog post "How we prepared for our gluten free diet in Edmonton".  What an exciting first year it was, plenty happened and as we said in our Happy New Years 2011 post, we have plenty more to come!

Here are the top 5 things that got me the most excited last in 2010 about Gluten Free Edmonton!

1.  Our First Post
January 6, 2010 I wrote our first post about how Amanda and I prepared for gluten free living in Edmonton.  I didn't know what to expect, I just knew I wanted to do this to help Amanda and the Celiac community in Edmonton.  I went into this hoping to reach a few people and expected that a few dozen people would visit Gluten Free Edmonton a month.  One year later and we have had over 16,000 visitors to Gluten Free Edmonton, and over 40,000 pages viewed!  Blows my mind!

The second piece to this was being mentioned on Breakfast Television.  I was honoured to be mentioned by special guest and Social Media Specialist Mack Male as a top blog performer in Edmonton, specifically as a niche blog.  It was simply nice to hear that what I was doing was being recognized and that I was doing the best at helping the community. 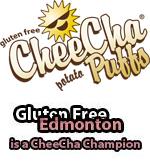 3.  CheeCha Champion
Our friends at CheeCha Potato Puffs have been wonderful to us since the first day I emailed them to tell them how much we loved their product.  We quickly became CheeCha Champions and posted a banner about the snack on the website.  We have also been taking every opportunity to sample their gluten free line of snacks.  This has been our first great partnership!  Thank you CheeCha!

5.  Kinnikinnick's Gluten Free Workshop
This was definitely one of the tastiest things we did last year.  Kinnikinnick is one of the more prominent gluten free entities here in Edmonton as they have two large manufacturing facilities here in Edmonton that ship product out across North America.  They also know how to support the local community when needed.  Kinnikinnick recently held a gluten free cooking workshop that was outstanding.  For a mere $20 bucks they took a dozen people into their studio kitchen and put on quite a show, left you stuffed, and sent you off with a basket of Kinnikinnick goodies to make al the recipes they just demonstrated.  I was blown away by how creative the Kinnikinnick team of Chefs are at using their products