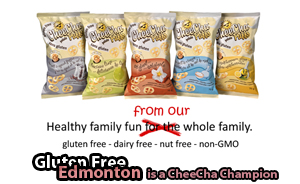 What are the chances of finding a super tasty, light, flavorful, low-carb, gluten free, dairy free, nut free snack? You'd think slim to none, right! Well that's what I thought too. I thought it would be virtually impossible. Until one day when Abisaac's co-worker was sharing a variety of different flavors of CheeCha Potato Puffs at work.


We first came across CheeCha potato puffs through an office mate of Abisaac's. She was sharing her new found treat with her co-workers. Low and behold...they had a super yummy line of Gluten free CheeCha puffs.


Amanda: Are they actually gluten free?

Abisaac: Yes they are and they are not made out of a bunch of chemicals either

Amanda: Hmmm they must be really high in carbohydrates and fat

Abisaac: Nope they're actually very low in carbs (2 cups is only 15grams of carbs) and they're cholesterol free and have zero trans fats

Amanda: Wow! They must completely lack flavor (aka: taste like dirt)

Abisaac: No not at all! They're really well flavored and they come in a variety of different flavors.

Amanda: Well they must be only available in the USA then, right?

Abisaac: Actually CheeCha's are from a family based business in Calgary, Alberta.

Amanda: Holy! That almost sounds too good to be true.


I have been hooked ever since. My personal favorite flavor is the Sea Salt and Spiced Black Pepper, but honestly they have a bunch of other flavors and they're each very tasty.


As someone who has both Type 1 diabetes, needing to count my carbohydrates, and Celiac disease I have come to love the variety of flavors available from CheeCha's. Generally speaking gluten free foods are very high in carbohydrates therefore making eating sometimes feel like a diabetic nightmare.  I have often told people that the low carb count of CheeCha's enables me to have a "salty" snack that is gluten free and even at times the amount of CheeCha's I can eat (for only 15 grams of carbs) is too much for me. I know! I couldn't believe it either.


Our love of CheeCha potato puffs led us to become "CheeCha Champions". We do not work for the company, but we share our love of their products with others in hopes of spreading the word and speaking their praises.


Where do you buy your gluten free CheeCha Puffs in Edmonton?


* CheeCha potato puffs are available in both gluten free and non-gluten free varieties. Be careful (as always) to read the packaging to ensure you are picking up the correct ones