Posted by Abisaac Saraga on April 23, 2010
This gluten free recipe is from the Gluten Free Everyday cookbook.  We tried this recipe because we used to buy store bought coconut shrimp, but realised we could no longer buy it because it was not gluten free.  I have to say we did not make the marmalade, but used to alternative sauces instead. 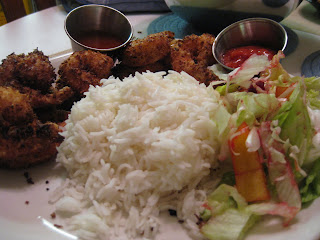 Pat the cooked shrimp dry with paper towels and set aside.  For the coating: In a medium bowl, whisk the cornstarch, tapioca flour, and Old Bay seasoning together.  In another bowl, whisk the egg.  Put the coconut in a third shallow bowl.

Coat the shrimp with the cornstarch mix and shake off excess starch.  Dip into the egg and then roll in the coconut.  In a large, heavy saute pan, heat 3 inches of oil over medium high heat.  Deep fry 6 shrimp at a time until lightly browned, about 2 minutes.  Transfer to paper towels to drain.  Repeat for the remainder.

Serve with salad and rice!

Our tip:  Watch the shrimp carefully, basically by the time we put the shrimp in they were ready and toasty, so two minutes is probably too much.  Because the shrimp is cooked, you really only have to worry about the batter browning.

Alternative Sauces:  We used No Name Pineapple sauce, and made our own shrimp sauce with two part ketchup, and one part white horseradish.
Gluten Free Recipes
Location: Edmonton, AB, Canada